I am writing this to give a bit of information about the two “creatures” called CBM and Conventional Gas, before I get into my PhD research.  This is a little bit technical, but just to remind you, that  I am not a geologist nor a petroleum engineer nor geophysicist. So, i am going to explain about these two creatures with my way of understanding, and I do really hope that you will understand the difference between two of them.

What is exactly CBM? CBM is Coal Bed Methane – betty that is the abbreviation! – yeah that is exactly what CBM is! It is a Gas (methane) that is trapped in a coal! That is why we call it Coal Bed Methane (CBM).  What is the difference with the conventional gas? That is good question! the conventional gas here is the gas that is trapped in a fault! Honestly, I didn’t understand as well before I started my research proposal! 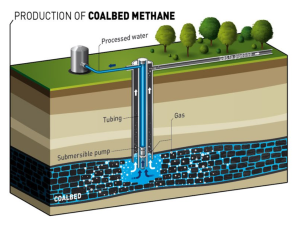 To see more clear, see the picture below:

(Flores, 2014)
See? The CBM is actually just almost on the surface 😀 And conventional gas is down there.

Next, the volume of the production.  Do you know how much one CBM well can produce? It is not a big volume though and even worse, the volume produce is just fluctuating. The volume can be as small as 50mcfd and as high as 5mmcfd.  What about the conventional? Hohoho, that one conventional well can actually produce as high as 1bcfd!!! and even if it is not that much, you might get as small as 300mmcfd for one well! See how much difference that volumes are?

How long do you think the production life of a CBM well? Guess.. The conventional gas well can have over than 50 years production life. What about CBM? Unfortunately, it is only 5 -15 years, and you need to be lucky enough to have more than 15 years!

Let’s look at the production cycle below:

Look at the difference. Yes, CBM produces water sooo much at the initial production stages, but it decreases following the increasing of the gas production.  Then after the peak production, they both decreases til end of their life 😀

Now, let me summarise for all the explanation above.

Well, this is the end of the explanation about the two amazing creatures LOL.  I hope you find this information easy to understand and give you benefits!